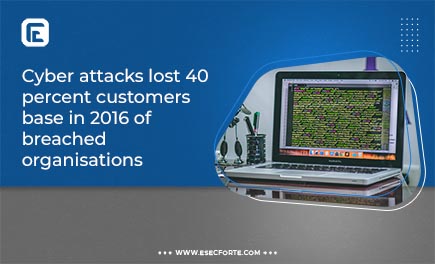 Over one-third organisations that experienced a cyber attacks breach in 2016 reported loss of customer, opportunity and a revenue loss of more than 20%, according to Cybersecurity Report.

Two big changes have happened in the cybersecurity practice in India over the last couple of years. First, the network has now become the first line of defence for your entire infrastructure, no matter if the infrastructure is on-premise, on the cloud on are laptops, desktops or mobile devices. Secondly , there is a growing realisation that breaches will definitely happen, so there is a crying need to come up with solutions to mitigate those breaches once they happen.

India saw an 85% increase in IP blocks, which represent the security system blocking an email sender because of their behaviour.

The report found that spam accounts for 65% of the total email volume, thriving through spam-sending botnets like Necurs, and 8% of this spam is malicious. Cyberattackers also found new ways to attack enterprise systems, with some advertising campaigns employing brokers that act as middle managers, masking malicious activity. This gives attackers a virtual “cover“, allowing them to move with greater speed, maintain their operational space, and evade detection.

Old-fashioned adware software that downloads advertising without user permission, continued to be the leading cause of infecting 75% organisations investigated.

Cloud also proved to be an entry point for attacks, with 27% employee-introduced, thirdparty cloud applications being categorised as high risk.

Reference from-  The Economic Times